From August 8 to 10, young people from many countries and States will come down to Miami, Florida, to participate to Shekinah Fest, a free Youth Christian Festival that will be held at Gregory Toussaint’s Tabernacle of Glory located at 990 NE 125th St #200, North Miami, FL, 33161. Thousands of young Christians will be revived, refueled and empowered during a big time of revival, seminars and concerts. Click here to REGISTER NOW.

“Alive: a generation that refuses to die” is the motto of this great youth festival and conference that will take place in North Miami from August 8 to 10 at Tabernacle of Glory. One of the reasons to organize this event is to keep this young Christian generation alive, on fire for God, according to Pastor Gregory Toussaint. “We want our young Christians to be on fire the same way adults are. Satan’s plan is to send our young to prison, to intoxicate them with drugs, and to waste their lives. We say no, young people can be leaders, pastors, evangelists serving God faithfully”, says Pastor Toussaint who himself started preaching in New York at 15.

in the Diaspora, explains Gregory Toussaint. “Last year while I was preaching in New York, some church leaders told me there was a generational crisis in Haitian Churches. They feared that Haitian churches in NY might have disappeared in ten years if nothing was done. Those leaders informed me that most of the pastors who founded the Haitian churches are now in their seventies and eighties, and they have no one to pass the baton. The young Haitian Christians who should take over have either left church definitely or went to the American congregations”.

In most of churches, continues Pastor Toussaint, young people are present between the ages of 1 to 20. From 20 to 40, they will be totally absent. Some of them may come back at 40-50, if they never come back. The children of the first generations of Haitian immigrants (1960-70) will have left church, and most of them are professionals, intellectuals and so on. “We at Tabernacle of Glory are blessed that 60-70% of our attendance is made up of that gap which is missing in most of the traditional assemblies”, gladly states Gregory Toussaint.

Shekinah Fest comes from that alarming observation and the desire to help rising new leaders among the youth. During a weekend, young Christians will be empowered and refueled to go back home and serve.

Shekinah Fest will be a week of revival, workshops and concerts. Prior to the weekend of August 8-10, there will be five days of revival themed “Terrorizing the terrors of the night”. “This important teaching on spiritual warfare had been preached last year to a Creole speaking audience at Tabernacle of Glory, but we think it’s important to preach it in English as well for our English-Speaking youth”, announces Pastor Toussaint.

During the weekend of August 8-10, there will be many workshops. Those seminars aim to “empower, to equip the young Haitian American Christian men and women so they can ensure continuity in their churches after the elders are gone”, declares Robert Clement, from Febo Management Inc, one of the organizers.

There will be conferences on leadership, ministerial ethics, music, relationships, education and finances, according to Clement. Most of those seminars will be hosted by Pastor Gregory Toussaint.

After the revival and the conferences, Shekinah Fest will end on a great concert. Many artists and groups as Dickson Guillaume and Libere, One Accord, Cheraky Toussaint and VOI will be singing at the festival. On Sunday morning, August 10th, there will be a special guest, assures Robert Clement, and there will be a major concert on Sunday night to close the event.

This is the first time there will be such a festival to gather young Christians in the Haitian Diaspora. Many will come from New York, New Jersey, Boston, Massachusetts, Chicago, Montreal, Paris, Dominican Republic, and of course from Florida to spend time together. It will be a time of praise and worship, prayer and sound teaching, concludes Pastor Toussaint.

To register free for Shekinah Fest:

or come to Tabernacle of Glory 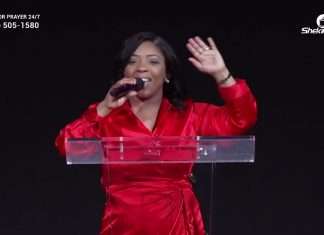